Hong Kong markets slide as the economy continues to suffer

No Result
View All Result

New Delhi -Life in India’s crowded and chaotic cities can be tough. An app backed by Google is promising to help with everyday tasks by asking “what would you like to Dunzo today?”

Dunzo offers to take care of your to-do list, picking up groceries, transporting packages or making a pharmacy run. The Bangalore-based company’s thousands of delivery drivers, identifiable by their bright green helmets with a lightning bolt logo, spend their days doing tasks that include picking up dry cleaning and delivering forgotten laptop chargers from homes to offices.

“Dunzo is like a browser on top of the real world, where you can transact, courier, and commute from one place to another without ever having to step into the real world,” founder and chief executive Kabeer Biswas told CNN Business. “Dunzo brings the city to you, no matter where, no matter what, no matter when,” he added.

Biswas came up with the idea when he moved to Bangalore — known as India’s Silicon Valley — in 2014 after selling his first startup in the northern tech hub of Gurgaon. Trying to find his way around a new city, he found himself wishing he could get “an extra pair of hands.”

He decided to start a group on WhatsApp, fulfilling many of the early requests himself like shopping for party supplies and helping get a car battery changed. Word spread quickly and as his phone got inundated with messages, he realized he needed to scale up.

With three co-founders, Biswas built a company that now does more than 2 million transactions a month across nine Indian cities including New Delhi, Gurgaon, Mumbai and Hyderabad. It’s even started a bike taxi service.

Dunzo charges customers based on the task and distance traveled, and says an average delivery costs less than a dollar. But the bulk of its revenue comes from the commissions 12,000 small businesses pay Dunzo to help them fulfill orders. Dunzo reported a 1.7 billion rupee ($23.5 million) loss in the last fiscal year. But operations in some cities are already “profitable or on the way to profitability,” it says. 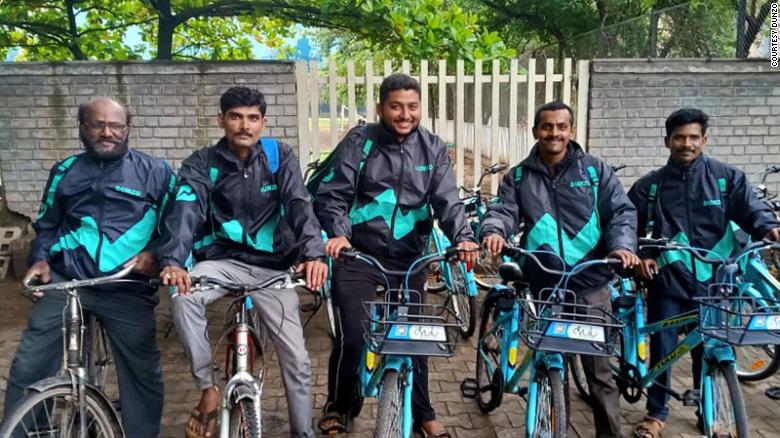 “What worked for Dunzo was that it was the first of its kind in India, and perhaps the world, to do what it does, and the seamlessness with which it solved real problems,” Biswas said.

Two years ago, Google (GOOGL) came calling. The company participated in a $12.3 million fundraising round for Dunzo, its first direct investment in an Indian startup. Google poured in more money last month, taking part in a $45 million round that reportedly valued Dunzo at $200 million. Dunzo declined to comment on its valuation.

Where Google has become synonymous with search, Dunzo is hoping to do the same with on-demand service in India. “Just Dunzo it” is becoming an increasingly common phrase as the app expands across the country’s biggest cities.

“With any brand that becomes a verb, it has to do with the emotional gratification that that brand provides with its product or service,” Biswas said. “Google simplified access to information, Uber made commuting more convenient, WhatsApp made communication easier and Dunzo has made getting things done faster,” he added.

Biswas has an ambitious vision for his app — he says the possibilities and potential uses are “limitless” — and he also has plans to expand. Dunzo aims to nearly triple the number of cities it operates in, targeting India’s top 25 in the next 18 months.

And what about going global? “Anything is possible.”

New Delhi -Life in India's crowded and chaotic cities can be tough. An app backed by Google is promising...

Is Japan the Most Overrated Travel Destination in the World?

Traveling with a second language is a life savior

Circular runways could revolutionize how planes takeoff and land

No Result
View All Result